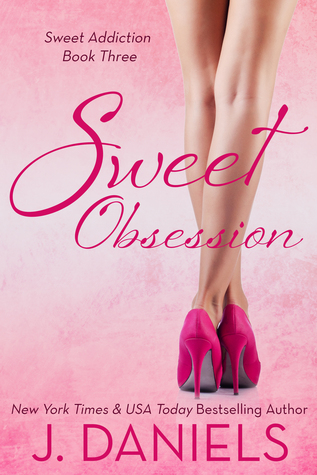 Author’s Note: Sweet Obsession can be read as a standalone novel.

Everyone knows Brooke Wicks loves to have a good time.

She’s not interested in getting serious, settling down, or limiting herself to one man. So when she meets the sexy, irresistible Mason King, she sees another opportunity to let loose and go wild. But the gorgeous Aussie isn’t interested in just a quick fling with Brooke, and if she wants to get into his bed, she’s going to have to do it on his terms.

Loving fast and hard has always been Mason’s philosophy.

He doesn’t want a meaningless connection, he wants it all, and he wants it with Brooke. When she makes her one desire known—to hit it and quit it—Mason wages a plan to ensure Brooke keeps coming back for more. Or so he hopes.

Getting her attention was the easy part. Keeping it might be damn near impossible.

Sweet Obsession is where the Sweet Addiction series meets the Alabama Summer series.

Another off my 2016 Bookworm Bingo Challenge – A book published in 2015. Sweet Addiction is a great name for this series as you will be addicted within a few pages. Great characters throughout – the women are sassy and the men are beyond hot.

You are taken on a bit of an emotional journey with Brooke throughout this book with how she views men and her relationships with them. She is a woman who knows what she wants and usually gets it. She loves sex and isn’t afraid to go out and get it when she wants – I mean the book starts with her just about to orgasm with a guy she picked up. She is just sick of the double standard she gets because of it. This all changes though when she meets Mason. One look from across the street and she knows that she wants him in her bed but getting him is proving a little more of a challenge than she is used to. He definitely pushes her out and past her comfort zones that’s for sure.

Mason has just opened up a hot yoga studio across the street from where Brooke works in a cake shop. The moment he meets her – holding a box of cupcake goodies – he know he wants her and gets the feeling that its very mutual. He just doesn’t expect her to come right out and ask for it. He can see right off that she is an interesting person and wants to get to know her better before thinking about sleeping with her. He knows he could easily sleep with her straight off the bat – to the point of taking her there and then in the street with the heat coming off them both – but he gets the feeling that it wouldn’t go any further than that. He does everything he can think of to get her round to his way of thinking and dating, something that is somewhat foreign to her.

To start with Brooke sees this as a challenge – one she is willing to take on as she just knows that the sex will be amazing (which it is) – but even after only spending a short amount of time with him she stops trying to jump him and starts to just relax and have some fun. But by getting her out of her comfort zones Mason might be at risk of pushing her too far. He knows what she was like before he met her and when he sees something he shouldn’t have he throws it back in her face. It’s at this moment that you want to just slap him in his face. His has to get her past out of his head to even begin to see a future with her.

Such fun characters to keep you entertained throughout. Even though this is actually book three in the series it can be read as a standalone – you won’t feel lost at all. All that will happen is that it will make you want to check out the rest of the series, especially to see how two of the characters in this book got together. It’s a sinfully addictive read wrapped in a sweet mix of cupcake heaven.

I received this ARC from Give Me Books for my honest review.