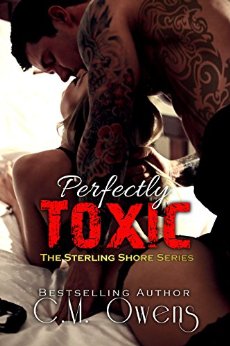 New life. New job. New home. New goals…
I vowed to make drastic changes and to never fall back into old habits. But then Ethan Noles showed up and blew all my good intentions to hell. I should have stayed away. I shouldn’t have played his game.
But I did.
Now I just hope I don’t regret it.

Bella is the type of girl you can’t help but chase, because she doesn’t want to be caught. I came back ready to live and enjoy life. Not to get tethered to a girl. But… shit happens. Bella happens. And everything I thought I wanted slowly changes.

CAN BE READ AS A STAND-ALONE

Goes down as another off my 2016 Bookworm Bingo Challenge – A book by an author who uses initials in their pen name. Well we finally find out why Bella and technology don’t go hand in hand and it’s not just her. It seems a few of those naughty Sterling boys have been messing with our girl Bella but lets say fate had a hand in it as well to be able to get her talking to our boy Ethan.

Ethan’s only been back in Sterling Shore for a few weeks and already finds himself in the emergency room due to an unfortunate incident with a crazy one-night stand and a broken beer bottle. His night might just be looking up though when Bella strolls in. From the moment he sees her he is intrigued so goes full on charm. Shame its to no effect though – well almost to no effect as she rejects him after he shows her a little more than she was expecting. Well they did tell him to strip off before putting the gown on so he was being a good boy and doing what he was told. So when Bella is sorting out his cut high up on his leg her eyes get drawn to his crotch when he leans back. Yep by the piercings he has (Jacobs ladder – wowzer!) you can understand why Bella might just whimper. But she has sworn off all playboys like him and won’t be drawn into his game. Shame Ethan has no intention of listening though. It seems he actually felt her when she patted his cheek. Confused? Yep me too until later in the book, when it’s explained more though you will just want to give him a hug. Anyway this just makes her that much more appealing, he needs to see if it was a fluke because she caught him off guard or not. Seems she’s a trigger for him, one he’s going to be very pleased he met.

Bella has tried to change her way of dating due to some bad choices in her past. So finds herself on some god awful dates. They either bore her head off or turn out to be narcissistic assholes. Good job Ethan is there to help mix things up when he crashes one of them. I think the fact he hasn’t had someone turn him down before means he can’t give up the chase. So turning into full stalker mode he ends up calling his number from her phone so he can talk to her. To say she is not impressed would be an understatement – I mean she changes his name to asshole. It’s when he starts texting her that he has the pleasure of getting full Bellared (yes I decided her name can be a verb in relation to her texting) ‘stupid ducking phone!’ Love her.

It’s while he is at one of the many Sterling peeps gatherings that he finds out that Bella is part of the group, which at first makes it more interesting. Not so much though when he finds out she won’t date anyone within her circle of friends. Seems Ethan isn’t giving up, and after a very big act of kindness, Bella can’t stay away either. He’s the first person she thought of when it happened and it seems saying that was the right answer because his reaction is beyond hot. He has the muscles to hold her up and he definitely seems to prefer walls to any other surface when it comes to taking her. Not wanting to burst the bubble they have created Bella wants to keep them hidden, at least for now, not that Ethan is too happy about it. Only problem with the ‘would be’ romance is Ethan’s view on why he came back to Sterling Shore from Chicago. He took over his fathers business at 18 and has spent 10 years working his ass off. It means he has a very warped view that he missed out on all his partying years so wants to make up for lost time, something Bella isn’t keen on.

She has already done the crazy drunken years and wants to settle down. How much of his antics can she take? He seems to be to push people away without thought when he feels threatened or fear of being hurt himself. It’s this rash behaviour that Bella doesn’t want to deal with but when a shock revelation turns everything on its head she’s going to have to face it. OMG Ethan’s reaction at the hospital (won’t tell you why he’s there though) is heart wrenching. His and all their friends too. They have become a very intricate group over the years and I love that it’s getting bigger. Can’t wait to see it grow when Dale and Mav get hooked – your time is coming boys so watch out! Ethan and Bella might be toxic but in the best way. Totally made for each other. I wonder if he’s going to mention what those boys have done to her phone though or if he will let the craziness continue?

Only thing I’m disappointed in is that there wasn’t a preview of the next book at the end of this one 😦 Also got a little worried for Brin and Rye for a moment there. Glad it all worked out in a very Brin/Rye prank war kind of way though. Everyone else seemed to be going ok. Love that they are all interlinked with each other’s stories now. Poor Kode will he ever get Tria to change her mind on marriage. I have a feeling it could happen in the next one – fingers crossed! Oh and we know time has passed a bit because Tag and Ash have had their little girl Autumn, Fall for short – so sweet! The series books can all be read as standalones but to get the whole picture I would recommend reading in order, that and the series is great anyway so you should pick it up!