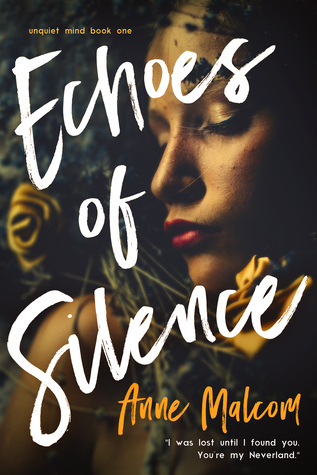 I’ve read every novel I could. I’ve lived and breathed every song that I could listen to. The sounds fill my unquiet mind.

He brought with him the beauty of silence that echoes through my soul and showed me love isn’t complicated. It’s simple. Beautiful.

Some say love at first sight doesn’t exist, that you can’t find your soul mate at sixteen years old. Those are people rooted in reality, chained to the confines of life that dictates how you are meant to think. Killian broke those chains. He broke everything, shattered it so I can see that reality is overrated, that daydreams can somehow come to life.

My life tumbled into darkness in the time after I met him, so dark I’m not sure I’ll ever see the light again. But he is always at my side. His life means he knows how to navigate the dark and he can lead me out.

I wade through the darkness with him at my side.

We’ll be together forever; I’m certain of that.

Note: This is book one of two. Killian and Lexie’s story does not end here and will be continued in a following book.

Goes down as another off my 2017 Bookworm Bingo Challenge – A book from your Goodreads ‘to read’ list. Glad it was too as its a great story and read. I love reading a book where I can see myself in the main character. Well not the waking up at dawn and wanting to go for a run part but the getting lost/absorbed in music and books part. Now that is very me as I couldn’t live without them and it seems neither can Lexie. It’s like a way into her soul, or the souls of others, when music is around her. Escaping into books is something she loves but when Killian comes onto the scene he soon becomes something more enticing to escape into.

New to town she always finds it easy to meet new people, reserving judgement about them until she knows them better. From the moment she meets Killian she is pulled up into a new world, one that might not be for her – well not yet anyway. She never thought she’d be one of those girls who would obsess over what to wear and how to act for a guy but something about him makes her want to try. Doesn’t really matter what she does though as he can see through to the real her and wants her just as she is. Whether he thinks he’s worthy is something else entirely.

Killian is part of the Sons of Templar MC family and when old enough is planning on getting his Cut and becoming a full brother. He never thought he’d want anything else but the moment he sees Lexie – or Freckles to him and him alone – everything changes. She makes him want to be better when she’s near and nothing is going to keep him away. Still young and at school you have a P.G. romance going on but the longer they are together the hotter they get. The relationship and story is based over two years. He might only be seventeen but he’s always acted more like a man than a boy. Some of the things he comes out with are just so swoon worthy you can understand why she would need a few seconds breather after them to get back to earth. Their relationship is anything but easy going with him being involved with the Sons of Templar MC though and it’s not just him. Lexie’s mother (who I loved by the way) starts to get involved with their neighbour Zane – club name Bull, something they refuse to call him. With being linked to the club they have to be careful as not all Cuts are alike and trouble between them is ever present throughout the book.

Mother and daughter relationship has very much a Gilmore Girl vibe to it but as I love the Gilmore Girls I thought it was great. Connection between them is clear and strong, they would do anything for each other. All Lexie wants is for her mother to be happy so she’s pushing to keep Zane in her life. Without a father figure he steps in when needed but the longing to know about her birth father causes some tension. There’s a very good reason he’s not in the picture though, something she finds out later on. Club matters stay close to home and I liked that she knew what to do in certain circumstances, something they clearly respected her for it. Once you are connected to a Son the whole club is at your back when trouble hits. Which is good as trouble and danger seems to follow them.

Not all doom though as Lexie meets three great lads at school who come to be her best friends and band mates – Sam, Noah and Wyatt. The more they play the better they get and more people like them. Loved the friendship that formed between them, those boys would protect her from anything. She’s set for the big time but where would that leave Killian. All he’s ever wanted was the club and if he stays she might not be who she’s meant to be. Loved how they fell for each other. Young love at its best, some might think it was too much but these two are soul mates. As there are two parts to this I had a feeling how it might end but it still made me feel a bit crushed. Awesome boyfriend needs to get his head back on straight for book two so he can continue being awesome and not a heartbreaking fool. Great read that had me hooked from the start and not only from their romance but with Mia and Zane’s and the moments between Zane and Lexie. Great bit of writing from an author I will definitely want to check out again. Book two here I come! Loved her song for Killian (name of book Echoes of Silence) clear how she feels for him. Can’t wait for some of the songs in next book though. I’m thinking they will have a very different vibe to them.

I received this ARC from the author for my honest review.