Book Review: ‘The Flame and The Arrow’ by Emigh Cannaday 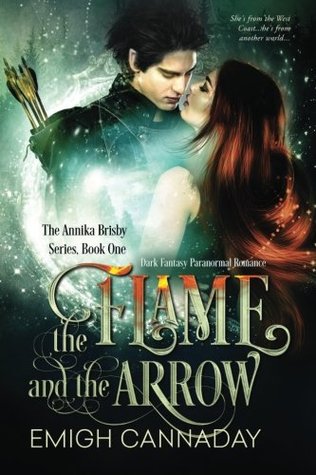 Title: The Flame and The Arrow (The Annika Brisby Series Book 1)

“Don’t do it, Annika,” he taunted. His eyes were no longer bright and charming but dark and intense, yet they still twinkled. He was tempting, but was he harmful?

Aspiring rock star Annika Brisby thinks she knows where her life is going until she steps through a broken portal that leaves her stranded in a fae – filled realm of fairies, shapeshifter druids, psychic vampires, and other mythical beings. Unable to return until it’s repaired, she’s rescued by wood nymphs who believe her sudden arrival is no accident. After being taken in by a prominent family of elves, Annika finds herself struggling to resist the seductive spell of their youngest son, Talvi. Equal parts arrogant and alluring, the notorious heartbreaker seems like the perfect distraction for her homesickness. Her new friends warn her that she’ll probably regret ever laying eyes on him, and what begins as a casual fling with a telepathic elf for a lover quickly burns too hot to handle. By the time Annika learns the consequences of their forbidden trysts, Talvi’s already under her skin and dangerously close to her heart. But on the journey home she discovers that there’s a mountain of secrets that he’s not telling her, and Annika can’t help wondering who’s really in danger.

Goes down as another off my 2017 Bookworm Bingo Challenge – A book over 400 pages. Well this fantasy story has a bit of everything in it all rolled up in to a complex but interesting story. You have elves, fairies, vampires, druids, a unicorn and so much more all hidden through portals to another world. A world Annika is about to get a crash course in.

Oh my there are so many characters in this that at times it’s hard to keep up and remember who is who and how they are connected to each other. The key players help create such a dynamic group though that you just go with the flow. I did feel that the first part, even though good, did drag a little and then the battle at the end went all too fast. I guess it just helped build the tension with what was going to happen alongside the ever-present tension between Annika and Talvi – one very hot elf. A match made in heaven or hell, you can never be too sure with how they act around each other throughout. A prophecy seems to be the key to everything though and not just with them. One he has had time – 300 years to be exact – to think over and finally accept, Annika on the other hand not so much. There are quite a few sub stories running alongside this as well with Talvi’s sister Yuri and her love interest Konstantin, who happens to be a vampire. Also I can never really get a feel for Talvi’s older brother Finn. He’s meant to be such a gentlemen but for how long I wonder.

Annika is going through a bit of a disaster in the love life department. She had a guy, he even proposed, but she never really felt that she was meant to be with him. On some level I think she knew she was meant to be somewhere else with someone else. So when her Uncle Vince says she should come and stay with him while she thinks things through she jumps at the idea. Little did she know then that it would be the start of a whirlwind adventure that would take her to another dimension, Eritahti to be exact. While checking out the village near by a group of people catch her eye. Mainly from how they act but also how they are dressed, almost hippy forest like. I say she’s looking at the group as a whole but really it’s the guy that draws her in. So much that she follows them into a bookstore. Its here that things start to get a little strange with the girls as they all but pounce on her, start calling her Magda and keep trying to get her to lift her top up to look for a birthmark. Flustered she runs away but not before the guy chases her down to say he will find her again. Chemistry is seen right from the start with Annika and Talvi, no matter how much they both try and fight it. He caught her attention enough for her to follow him. Their first meeting you are asking yourself whether it was by chance or fate? It’s later when she’s trying to find herself and explore that she lands herself in trouble. Lost in the woods with a hurt ankle she spots the strange girl from the day before and all but begs for her help. The girl tells her she shouldn’t follow – as she may not get back – but Annika’s in so much pain I don’t think it really registers. When she goes through a waterfall and into a portal however she may want to change her mind, but by then it’s too late.

So now she’s stuck with Sariel, Runa and Hilda who happen to be wood nymphs. Something she’s not quite sure she believes could be real and it gets stranger when they keep telling her she must be related to them due to her birthmark. Seems this is the start of a crazy adventure, one at times she wishes she could escape. Thrown into a strange world with stranger creatures and no way home. The journey will have danger but also some fun along the way. Well if she gives in to Talvi’s suggestion that is. He is drawn to her but keeps holding back and returning to his wondering ways with how he acts around other women. You may want to slap him at times. Annika can never really get a feel on what he really thinks of her. The first time they kiss they both see visions of a future, not that he tells her his straightaway. Perhaps if he had then they wouldn’t have caused each other pain later on. Fate put her on this path and she must keep moving forward not back. Only then will she find her way home. Though she may start to question where home really is as its clear she is part of both worlds and they clearly want her in both.

The fae saying Talvi tells Annika about their love, even if she doesn’t fully understand it at the time, is really sweet. Talks of bumble bees crossing a meadow to get to each other’s flowers. I love that he references it at the end; it did make me laugh, and that it’s inscribed on something important. Their story it seems has only just begun.