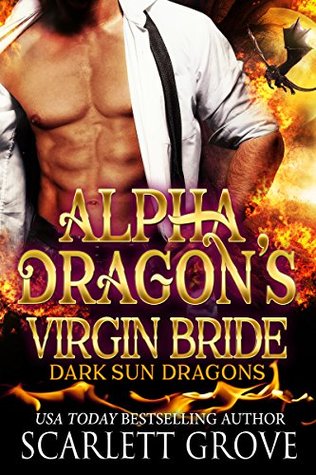 In a world of deadly alliances, can their love be reborn?

Desdemona Hawthorn is only nineteen years old, but she knows what she wants: a normal life. That’s impossible now, after that the sun went dark and dangerous immortals took over her planet. When she discovers she has magic of her own, she’s forced to go to the witch temple for safety. Despite the overpowering dreams of another life, where she was loved by one man and in love with another, she wants nothing to do with the immortals and their lies.

Alpha Titus Silverdrake must protect not only the members of his dragon clan, but also the humans in his region, from the Surge — an evil alliance of vampires and dragons who seek to rule the world. Despite his many responsibilities, when he recognizes the scent of Desdemona’s magic at the temple he knows he must reclaim the woman whom he loved above all else.

Desdemona doesn’t remember much about her former life with Titus … except a feeling of betrayal. But Kyran, the vampire who was her other suitor, hasn’t forgotten any of what went before. As she struggles to accept her destiny and her role in defeating the Surge, Titus must balance the need to protect his clan — and the world — with his battle to regain Desdemona’s trust … and her heart.

Goes down as another off my 2017 Bookworm Bingo Challenge – A book with magic and witches. A lot happens in this witchy paranormal sci-fi shifter romance read and I loved it from start to finish. The story follows Desdemona and Titus as they find their way back to each other. Seems Desdemona was once called Patrice in a past life – one she is only just starting to remember. A past life that saw Gama call upon all her witches to cast a spell to create a veil over all magic – a spell that took their lives in the process – some two thousand years ago. With the veil now lifted due to the Surge allies must unite to fight the battle that’s coming and those with magic will play a key part.

Desdemona lives in a compound with her family and a few others who escaped their old lives the moment the Dark Sun happened and magic, immortals, vampires and dragon shifters came back into existence. She may have been skeptical about all that has happened but she soon finds herself thrown into the middle of it after seeing what happens when she plays music. Seems the power of the notes is creating magic before her eyes and witches who are seen to have magic need to go to the temple for their own protection. Well she can’t see it as much of a protection as she knows she will be bartered off to an immortal dragon or vampire to become their mate so she can be a breeding mare – in her eyes anyway – to help strengthen their numbers for the war. She thinks to run away rather than go, but to be an unprotected witch would be dangerous. Any immortal would be able to smell her and seek her out to be theirs and she wouldn’t be able to fight back. It changes when her family sees her magic for themselves and its not long before she is on her way to the temple. She may be able to hone in on her magic and learn about her past life – well that’s if she believes about past lives – but its the thought of being mated to someone for one purpose that scares her and turns her attitude to beyond bratty with a reluctance to accept what was and now will be. She may dream about two men but she doesn’t really understand them. Only that the man she loved didn’t love her back and broke her heart. Two thousand years being reincarnated over and over again but still holding onto that hurt you know it will take something big to break through to her.

Enter Titus, the alpha dragon of the Silverdrake clan of St. Louis, in all his sexy dragon glory. Being alpha he has enough on his plate with shipments going missing and rebuilding his city after the Surge and the dark days that followed due to Xander. The danger hasn’t stopped and he knows something is brewing. Last thing he needs to worry about is a mate but he goes to the temple anyway. He’s blown away when he recognizes Desdemona’s scent and spends no time in making it clear he will have her. The first time they met he knew she was too young for him – well she had just turn 17 and he was 3000 at the time – and it seems history is repeating itself. She’s young and beyond bratty and seems to want to get under his skin and hate him for memories she hasn’t quite remembered yet. If he had just explained things from the past to her sooner then it may have gone smoother between them. But when he comes in pretty much saying as the new alpha he needs to set an example and claim a mate to create heirs, he’s not doing a good job of making her feel wanted. Queue tension people. Trying to win her over is one thing but when Kyran, a vampire and second in command to the King of Chicago, her past suitor comes on the scene he fears he will lose her all over again. She knows where her heart lies but its not until he tells her more of their past that she truly understands why he pushed her away. Their romance is subtle but builds with a lot of passion. I did think there would be more conflict between the three of them but that seemed to come and go quickly. It’s the battle that’s brewing that brings things into focus.

In this time where magic is infused with weapons and technology beyond human understanding you know you are going to need to come together to fight before darkness takes over. Interesting mix of romance, mystery, intrigue and danger in a sci-fi paranormal world where nothing is quite what it seems. Would have liked to know more about the battle waging but that might come later in the series.