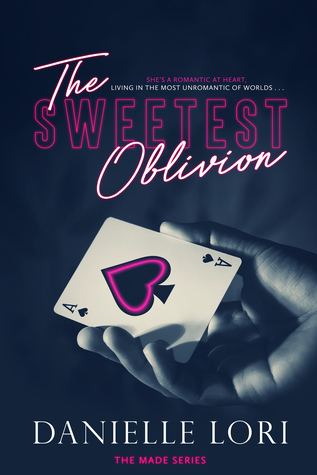 Title: The Sweetest Oblivion (Made Book 1)

She’s a romantic at heart, living in the most unromantic of worlds . . .

Nicknamed Sweet Abelli for her docile nature, Elena smiles on cue and has a charming response for everything. She’s the favored daughter, the perfect mafia principessa . . . or was.

Now, all she can see in the mirror’s reflection is blood staining her hands like crimson paint.

They say first impressions are everything . . .

In the murky waters of New York’s underworld, Elena’s sister is arranged to marry Nicolas Russo. A Made Man, a boss, a cheat—even measured against mafia standards. His reputation stretches far and wide and is darker than his black suits and ties. After his and Elena’s first encounter ends with an accidental glare on her part, she realizes he’s just as rude as he is handsome.

She doesn’t like the man or anything he stands for, though that doesn’t stop her heart from pattering like rain against glass when he’s near, nor the shiver that ghosts down her spine at the sound of his voice.

And he’s always near. Telling her what to do. Making her feel hotter than any future brother-in-law should. Elena may be the Sweet Abelli on the outside, but she’s beginning to learn she has a taste for the darkness, for rough hands, cigarettes, and whiskey-colored eyes. Having already escaped one scandal, however, she can hardly afford to be swept up in another.

Besides, even if he were hers, everyone knows you don’t fall in love with a Made Man . . . right?

This is a standalone forbidden romance.

Goes down as another off my 2019 Bookworm Bingo Challenge – A book that takes place in the summer. Suns not only thing heating up the temperature when Elena and Nico get in a room together.

Elena used to be seen as Sweet Abelli but that’s all changed. She doesn’t want to be that girl anymore. Always docile doing everything she can to not rock the boat within her family. Her family is more complicated than most, mainly due to the fact she is one of the daughters of an Italian mob boss. Theirs is one of five families within New York who don’t always see eye to eye. Her father is the don and what he says goes. A mistake she made months before has put her at odds within her family and herself. Running away and getting rid of something that should not have been given away only ended in bloodshed and a guilty conscious for her. She can’t undo what has been done but has a plan to ease the pain and guilt, whether she can see it through and what trouble it causes is something else entirely.

Now because of her indiscretion she seems to have thrown her sister Adriana under the bus with who she has to marry, even though it should have been her being the eldest. Not good when Adriana sees herself in love with the gardener, even more so when a shock announcement changes everything. Neither knew that they would marry for love. Just pawns for their father to use when needed. Adriana is a creative, eccentric, free spirit, who might just live in the clouds so isn’t really prepared for her new husband. Their father is having a bit of trouble that needs help from another family so goes to Nicolas Russo, the don of the Russo’s, to strike a deal. A marriage arranged in exchange for him making a problem disappear. Elena feels sorry for her sister but also a little glad it’s not her. That is until she meets Nicolas – Nico – and starts to get all hot and bothered for him and the way he makes her feel with just a look.

Talk about tension at the lunch table! A meeting of the families was never going to run smoothly, throw in some heat and Elena’s hotheaded reckless brother Tony and you are asking for trouble. He just loves to goad people to get a reaction but in the process ends up putting Elena in the firing line, quite literally. Good job Nico has good aim but the pressure to continue the meal after was extreme. You don’t disobey your father or the don boss who will be your brother-in-law.

Nico has quite the reputation, enough to make Elena nervous whenever he is near. He also manages to get her to say the first thing that comes to mind in any situation – some she may want to take back as he’s not one to be goaded. She may want to keep her distance but finds a pull there whenever he is close, which seems to be a lot. He only wants to be called Nico so you can imagine what she will keep calling him – hello Nicolas! In a way she finds she can be herself around him and not ‘Sweet Abelli’ like everyone else expects. The more she sees him the more she starts to crave what she knows he could give her, even though she knows she can’t have it. Pulse racing whenever he is near. Here’s hoping no-one notices or trouble will be coming from both families. Elena’s future might be in her fathers’ hands but let’s see if Nico can change that fate.

Connection only builds the more time they are together, tricky as she knows she’d fall for him. A moth to the flame not wanting to escape, even though she knows she probably should. My god they are like magnets pulled together whenever they are in the same room. The energy coming off them was insane. When they finally got what they both had been craving you could see they’d become addicted to each other. Marriage contracts are fickle, a Russo sees something he wants and takes it. The moment Nico saw Elena that was it. He would find a way to claim her as his own no matter what obstacles her father put in his path. Trouble may be a way of life with these families but secrets from past mistakes could be one step too far.

Elena’s cousin Benito, her driver/guard for whenever she needed to go somewhere, was amusing. Loved her Nonna, she sees more than see let’s on and goes with the flow. Her parents were high strung, but with her father being a don what would you expect. Nico’s cousin Luca was entertaining, he knew right off the bat that it would be Elena Nico would start to crave. Gianna was intriguing so I can’t wait to get inside her head in the next book.

Love it from start to finish, great characters and chemistry throughout. Electric energy from the moment Elena and Nico locked eyes. Craving something neither thought they could have until its right in front of them. Can they keep what they’ve got without getting lost in it? He would do anything for her and is fearlessly protective so god help anyone who ever tries to cause her harm. Great start to the series, full of other interesting characters that are all calling for their own books now.