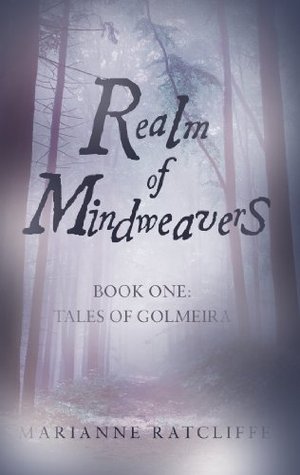 A ruler is betrayed and his young daughter is forced to flee or die.

Teenage Zastra is a big disappointment to her father, Leodra, ruler of Golmeira, because she hasn’t got what it takes to become a mindweaver, one of the highly valued few who can manipulate the thoughts of others. Things get much worse for Zastra when she is roused from her bed to find that Leodra has been betrayed and her beloved Golmer Castle overrun with enemy soldiers. She escapes via the castle’s ancient underground tunnels, only to be faced with a terrible choice. Hunted across the turbulent landscape of Golmeira, Zastra must rely on her wits and the help of strangers as she tries to outrun the powerful forces set upon her trail.

Realm of Mindweavers is the first book in the Tales of Golmeira series. If you enjoy page-turning adventure stories with strong female protagonists such as Trudy Canavan’s Black Magician series or Brandon Sanderson’s Mistborn trilogy, you’ll love these books.

Goes down as another off my 2019 Bookworm Bingo Challenge – A book by an author new to you.

Zastra is the daughter of the Leodra, Grand Marl of Golmeria, and he hopes that she has the mindweaver power, one needed to protect their realm. She was young to be tested at 13 and first thought is that she doesn’t have any powers. She might not have mindweaver power but she does have the ability to resist the power being used on her. A new power that could be of some use in times of need but not so good from her fathers point of view as he needs more mindweavers to be able to protect them against their enemies. He may look down on her a little after this but its not like he has any powers, her mother Anara on the other hand can sense the fears and emotions of others. His hopes might have to be saved for his baby twin’s Kastara and Findar.

Zastra has people on her side to help her. Dobery a mindweaver was the first to sense something different with her mind. Could help her develop her abilities to be able to detect and block other mindweavers. Could she help others too? Martek the master at arms fighting skills teacher and mindweaver could come in handy with what he might teach her. There is also Teona, a high master, teacher and mindweaver. She seems intrigued that Zastra’s skill is different, wanting her to train it. Zastra might be wary of her as a teacher to begin with but she is a great help in a time of need.

Enemies are what her father is worried of but maybe he should look closer to home. All the Marls are coming to Golmeria for a summit, her father wants to pass new laws but others seem apposed to them. Could this be the start to a coup from dangers unseen? He thinks that by having his brother Thorlberd Marl of Bractaris, along with his young son Rastran, stay for months that they can figure out what his enemies, the Kyrg who fight for coin, plans are. Will he figure things out too late?

Figuring out the dangers the Kyrg cause brings together one of Leodra laws he wants to change. It seems that old wars between two sets of land have caused nothing but trouble for years. To try to find a way of peace he invites Mendoraz, Lord of Sendor, and his children Kylen and Zadorax to talks about how to move forward. With troubles brewing it looks like blame is being focused on them rather than who is really at the helm. Especially after a Caralyx creature gets within the castle grounds heading for an attack on the children. Good job that Zastra is handy with a bow. Slow on the uptake on seeing things clearly and it might be too late with what comes next.

Zastra is going to need to be strong for her siblings when dangers come calling. Can she keep both of them and herself safe? She just needs to be careful whom she puts her trust in. Sometimes strangers might actually be best to help get somewhere safe. She needs to find people who are still loyal to her father to create a resistance. To do that she first has to outrun her enemies chasing her. To do this she has to make a difficult decision to keep them all safe. Hiding in plain sight might work for a while but she vows to return to put things right. Trouble and danger follow her on her journey, she must always stay on the move to keep everyone safe.

Interesting start to the series, sets things up nicely for how the world might evolve around them. War and battles are coming so she needs to look further afield to find those that will help. She always has those true to her father that will step in when needed. Can they be pulled together to overthrow the evil powers that have taken control? Continue the story to find out.

I received a copy of this book from the author via Instafreebie for my honest review.