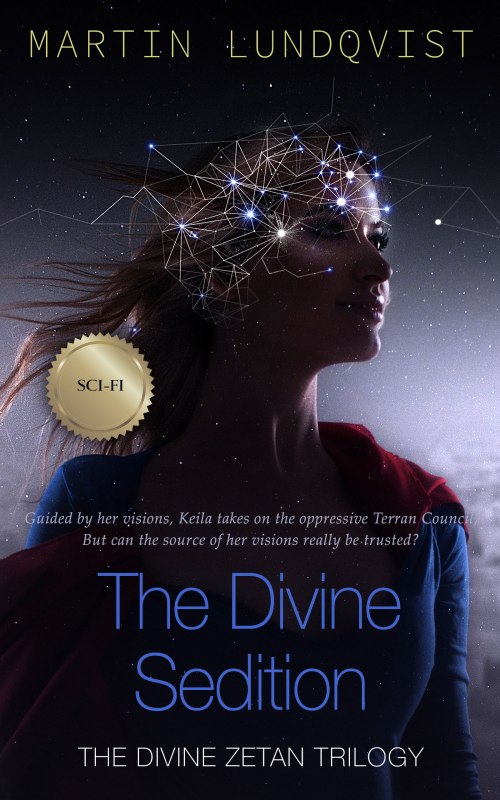 In the year 2872, a rebel-fugitive of The Martian Humanist Alliance, Keila Eisenstein crashes down on Eden, while running away from the Rear Admiral of Terran Council, Bjorn Muller; killing the God-dictator Abraham Goldstein and gaining the mind-control technology to dominate Eden’s population. Teaming up with Metatron, the Archangel guardian of Eden, Keila fakes her own death to fool Bjorn Muller to give up on his fugitive hunt.

Keila faces overwhelming odds trying to take down the overpowered Terran Council that has been dominating the solar system and oppressing most of humanity on Earth and Mars for over 500 years. She is governed by her primal instincts and premonitions, which made her the Chosen One: Her extra-terrestrial Divine connection. Her telepathic visions are leading her the way, and with access to The Divine Control Centre, Keila can unveil secrets of ancient Zetan civilisations that will help her free her people from the oppression of the Terran Council, Houses of evil plutocrats governing Earth and Mars. But with her Divine connection comes a price, so are the Zetans, using Keila as a puppet to gain control of Earth, or is it Rangda, the Xeno demon who lead her to the path of destruction instead, in fact better than the oppressors she seeks to dominate?

1: Tell us a little about yourself and what got you into writing?

I have always been writing something, from blogs to school essays etc. Back in 2013, I was sick of blogging as it became repetitive and a friend suggested to me that I wrote novels instead as that gives more creative freedom.

2: Do you have a favourite time and place where you write?

I prefer to write things at home with as few distractions as possible. I like to go for a walk in the park or along the ocean pondering on plot lines, but the actual writing I prefer to do at home.

3: Where do your ideas come from?

I think my ideas come from my brain but that they are deeply connected with the things I read and play. Most of my works have a lot of uniqueness to them for better or worse, but creativity doesn’t occur in a vacuum and it’s impossible to be truly unique in a world 7 billion people.

4: Do you have a plan in your head of where the story is going before you start writing or do you let it carry you along as you go?

I always start my major writing projects by writing a plot outline where I outline what is going to happen in the plot. I only follow this outline loosely, however, and the result is often quite a bit different from the original outline

5: What genre are your books and what drew you to that genre?

So, I have written one crime story, two science fiction books, one kid’s book and one parody, so I would say I am genre fluid in that sense. I mostly gravitate towards science fiction and fantasy in my writing though as that gives me more creative freedom than other genres. I tend to be more interested in concepts than in visuals, and I feel like science fiction is a good genre for me to write for that reason.

6: What dream cast would you like to see playing the characters in your latest book?

I am not a fanboy and I usually don’t obsess about actors. I would love to see the Divine Sedition being made into a movie, and I have some thoughts on how I would like the movie to play out and what the actors should look like. Ideally, I would like less established actors so that the movie is the about the plot and not about the individual actor’s stardom.

7: Do you read much and if so who are your favourite authors?

I read a moderate amount, a lot of my reading is on forums such as Quora. I am not really into favourite actors, authors etc. and I more interested in the plot and what it is telling me.

8: What book/s are you reading at present?

9: What is your favourite book and why?

I like the Lord of the Rings trilogy by Tolkien, so I’ll vote for that one.

10: What advice would you give to someone thinking about becoming a writer?

Just start writing. If you have an idea you should be able to get a full-length novel manuscript out in

200 hours or so. It might sound like a lot but subtract that time from when you are doing unproductive and stupid things like watching TV and it all adds up. As writing will be your hobby for now. Only write when you feel like it, but try to set aside time for it like you would any other hobby, (training, sports, holidays, religion etc)

11: What are the best Social Media Sites for people to find out about you and your work?

My writing roots:
When I was younger I used to write blogs for the joy of writing and for attention. Unfortunately my blogs were pretty controversial and caused me more problems in life than I bargained for, so eventually I gave up on blogging.
In 2013 an acquaintance suggested that I wrote fiction instead of blogs. With a fair bit of enthusiasm I wrote my first book a psychological crime thriller James Locker: The Duality of Fate in a couple of months back in 2013.

Late in 2016 I decided to take up book writing again as it is a hobby with more potential upside than playing video games on my spare time. I finished my Science Fiction novel The Divine Dissimulation a year later

In July 2018 I released the Divine Sedition which is the sequel to the Divine Dissimulation. It is faster and slightly more mainstream than its prequel.

I have also written a children’s book as an experiment called “Matt’s Amazing Week” I am currently working on two projects The Divine Finalisation which is the third and final entry in the Divine Zetan Trilogy and Divine Space Gods: Abraham’s follies which is a light-hearted parody on the Divine Dissimulation.

My style:
My personal approach to writing is that I write what I feel like writing with limited regards to what others want to read. As my works are work of fiction I tend to include controversial topics, as I am not bound to political correct self-censorship.

The writing style is quiet different in my two novels. While James Locker is mostly character and dialogue driven The Divine Dissimulation is mostly driven by concept and world building. The Divine Sedition is a mix of the two styles.